During the pioneer days, farmers would use a sturdy 3 legged stool to sit on and milk the cows for their milk. If that stool had one leg that was weaker than the other two then it would collapse and the farmer would fall on the ground. 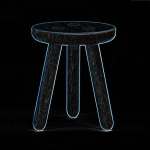 Until we focus equal amount attention on the other two legs then there will be minimal progress in the overall education system in the United States. Students must take an active role in their education. Yes, there are an increasing number of students that live in poverty, that have bad home lives or parents that are too busy to help them, but those are not reasons for not trying in school. In fact they are the very reasons that they should be trying harder in school. No matter how great the teacher is at reaching those students, there must still be active participation by the student. Students are not simply mason jars that you open their head and pour the information in them. They must be active participants.

The student must do their part also. When they are given an assignment then they must complete it. Far too many of students fail to complete their homework or just plain refuse. The teacher did not give the assignment just to give the assignment but rather it was meant to be an extension of the classroom by providing more time to practice and master the objective of the day. There are some that have legitimate reasons for not completing their homework such as needing to babysit their younger siblings so their single parent can work a second or third job but mostly not completing homework is a choice.

The parents must also take an active part in their child’s education. Many times when I have called to discuss an issue with a parent I have gotten the response “I send him/her up there for eight hours a day for you to deal with. Don’t call me back!” The parents do not have any expectations of their children. Many parents have the attitude that, “I’ve been government assistance forever and it will be there for you when you get older, so you don’t have to work for anything in your life, including your education.”

Parents need to be parents and hold their children accountable for their performance. If they are the weak leg, then the stool will collapse and be dysfunctional.

There is an alarming trend of only holding the teacher responsible for the student’s behavior or academic success. The cartoon below sums up the directions that the expectations coming from our parents are going. 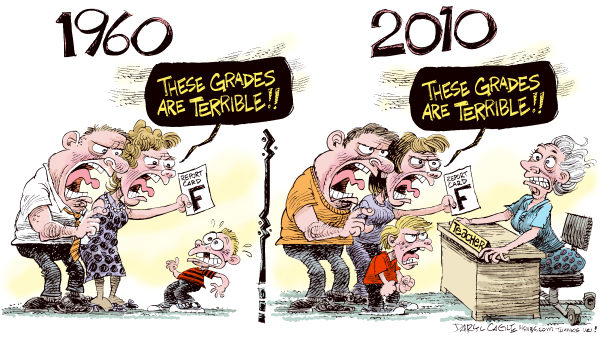 Another example of this disturbing trend occurred in a recent incident in Spring, TX when a student and a teacher had a physical altercation. With a minimal investigation the district jumped right to the conclusion that the teacher was the only one at fault and announced in the press that they would be seeking termination. The teacher is claiming self defense which means there is more to the story and the student had some partial responsibility. The teacher also packed his personal belongs, submitted his resignation and left the building. At this point only part of the story is being told. This situation is likely to linger on for a long time.

Life may have been a little slow and some would consider it to be boring in the 1950’s but the parents had the right attitude about their children’s education. Work hard in school, go to college and get a degree and then be assured of a job for life. This country has drifted away from this philosophy towards an attitude of mediocrity. Mediocre is the acceptable standard. There is very little pride in work, craftsmanship and effort.

Until we build a better, more balanced 3 legged stool there will be little improvement in the education system and the quality of student’s that it produces in this country.